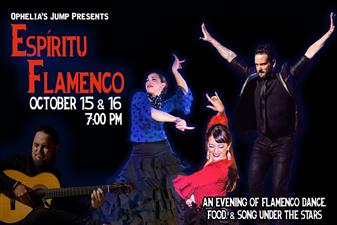 The event takes place at a private residence in Claremont. The address will be given to ticket purchasers.

Tickets for the full evening of dinner and show are $100.00. 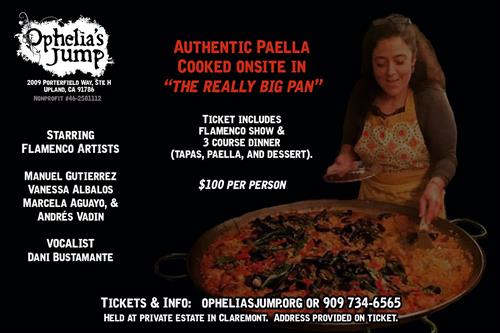 Ophelia’s Jump Productions will present Espiritu Flamenco,  an evening of exquisite Spanish food and virtuosic Flamenco performance on Friday, October 15, 2021 and Saturday, October 16, under the stars at a private residence in Claremont.

Wine, beer and sangria are available at a cash bar.

Manuel Gutierrez was born in Montpellier, France after his parents had migrated to South of France from Cordoba, Spain. From a young age, he had shown a talent for dance. By age twenty, Gutierrez began producing works and dancing across Europe with legendary artists including Duquende, Chicuelo, Juan Carmona and Chispa Negra. In 2008, Manuel was invited to choreograph the production “Flamenco Flamen’ka” which sold out the Lyric Theatre in London and ran for five years in Great Britain and France. Guiterrez’s fame as a choreographer and producer was growing. The Telegraph in London called his work “Fiery.” Danse Magazine nicknamed him, “The Young Flamenco Prince.” Figarro Newspaper raved “The dance is strong, voluptuous, and spectacular... a profound type of Flamenco and incredibly explosive.” Since 2011, Manuel has contributed his time as Artistic Director for Global Gift Foundation for the charitable initiative “The Global Gift Gala" which works alongside actress, producer and philanthropist Eva Longoria as Honorary Chair in benefit of Eva Longoria Foundation, Ricky Martin Foundation, Global Gift Foundation and many more.

Manuel concurrently has continued to dance and choreograph around the world. In 2012, he helped create the production “Juncal Street” with Fanny Ara and his choreography was nominated for an Isadora Duncan Dance Award. Currently residing in Los Angeles, Manuel is establishing himself as a very prolific performer and choreographer throughout the U.S., having created his first U.S production, “KOMPAZ”, performing with the LA Opera and continuing his collaborations with musicians of different genres in his quest to define himself as an explorer of dance in general and flamenco in particular.

Vanessa Albalos was born in Ciudad Juarez, Chihuahua, Mexico, which is where she spent her childhood. She began to study Flamenco dance at the age of 13 in El Paso, Texas with Rita Vega de Triana and Curro Niebla. After migrating to Southern California, she studied with several well-known teachers in the area, including Sarah Parra, Gabriela Garza, Jose Tanaka (guitarist), Jesus Montoya (singer), Manuel Gutierrez, and Briseyda Zarate. Vanessa has toured Mexico with the Festival Internacional Cervantino, and Japan with Jose Tanaka’s Soniquete Flamenco. She has also appeared in the annual Los Angeles Flamenco Festival, New World Flamenco Festival, Irvine Barclay Theatre, and frequently at the Fountain Theatre’s Forever Flamenco Series, and Houston Flamenco Festival with Jesus Montoya Company.

Marcela Aguayo has been studying different dance forms for over 15 years including time spent in Sevilla, Spain. She has studied and performed with the top performers in the Los Angeles flamenco community. For the last few years Marcela has been performing with Richard Chavez’ group at the close of the Santa Barbara Fiesta days at the El Paseo benefit show. Marcela performs regularly in southern California flamenco tablaos: Alegria, El Cid, Tapas and Café Sevilla. Marcela feels it is an honor to be a part of the small flamenco community that transcends throughout southern California.

Andrés Vadinis a Los Angeles, California Guitarist. Born in Cuba, Andres Vadin’s talent spans many different genres while highlighting the flamenco guitar as a universal instrument with no boundaries — a breathtaking fusion of traditional and contemporary interpretations, often infused with Cuban, Arabic, and jazz influences. Vadin graduated from the Guillermo Tomas and Almadeo Roldan Conservatory of Music in Habana. Vadin has played for some of the most talented flamenco artists known today, including Antonio Carmona, José Antonio Rodríguez, and Maria Juncal. He has toured throughout the world performing with Concha Buika, Faramarz Aslani, Wadih Al Safi, Billy Cobhan, and in festivals such as WOMAD, Glastonbury, Montreal International Jazz Music Festival, and at rock legend Steve Vai’s Big Mama Jama Jam-a-thon.

Tickets for the full evening of dinner and show are $100.00. To make reservations, go to http://opheliasjump.org or call (909) 734-6565. The event takes place at a private residence in Claremont. The address will be given to ticket purchasers.

Proceeds from the event will support the ongoing artistic and cultural activities of Ophelia’s Jump Productions. A non-profit company founded nine years ago, it is based in Upland and performs in Claremont and Upland. Ophelia’s Jump (OJP) believes that “the purpose of theatre is to create unending conversations, spark imagination, incite conscience, and elicit a visceral response. OJP aims to invigorate the creativity and intellect of our community by working with local and regional artists to tell compelling stories and educate new generations of theatre lovers.”

Covid safety protocols in effect on the days of performance will be observed.