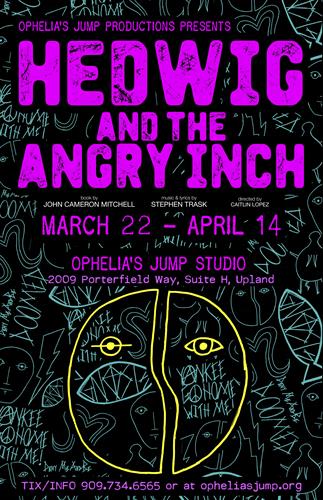 Ophelia’s Jump Productions (OJP) continues its successful 7th season with Hedwig and the Angry Inch, performed at the Ophelia’s Jump Studio, located at 2009 Porterfield Way, Suite H, in Upland, from March 22 through April 14, 2019. Having just completed their production of Venus in Fur by David Ives, OJP continues to explore gender identity under the direction of Associate Artistic Director Caitlin Lopez.

Brilliantly innovative, heartbreaking, and wickedly funny, Hedwig and the Angry Inch is the landmark musical by John Cameron Mitchell and Stephen Trask that is “groundbreaking and undoubtedly ahead of its time” (Entertainment Weekly). This genre-bending, fourth-wall-smashing musical sensation, with a pulsing score and electrifying performances, tells the story of one of the most unique characters to ever hit the stage. Hedwig and the Angry Inch played to record-breaking sell- out crowds on Broadway and took North America by storm with what Time Magazine proclaims is “the most exciting rock score written for the theatre since, oh, ever!”
Hedwig tells the story of "internationally ignored song stylist" Hedwig Schmidt, a fourth-wall smashing East German rock 'n' roll goddess who also happens to be the victim of a botched sex-change operation, which has left her with just "an angry inch." This outrageous and unexpectedly hilarious story is dazzlingly performed by Hedwig (née Hansel) in the form of a rock gig/stand-up comedy routine backed by the hard-rocking band "The Angry Inch." Using songs and monologues, Hedwig tells her story, which began in the former East Berlin where as Hansel he meets Luther, an American GI who promises to take the young man to the States on the condition that he switch his sex. After the bungled operation, Luther abandons newly named Hedwig in a Kansas trailer park, where she turns to music and meets geeky Tommy Speck, whom she takes under her wing and soon falls for. Tommy steals her songs, achieves rock star fame, and Hedwig is once again cast aside. She decides to demand redress and stalks Tommy's world tour, performing in makeshift locations adjacent to wherever Tommy is appearing. Ophelia's Jump's production applies a fun meta-theatrical conceit in having Hedwig commandeer the leftover set of a recently closed production of Mother Courage. While hawking her wares directly from the stage, Hedwig describes her life's search for "The Origin of Love" and her other half. It's a rocking ride, funny, touching, and ultimately inspiring to anyone who has felt life gave them an inch when they deserved a mile.
Title: Hedwig and the Angry Inch
Featuring: Michael Davanzo as Hedwig and Janelle Kester as Yitzhak
Written By: John Cameron Mitchell and Stephen Trask
Director: OJP Associate Artistic Director and Improv Director, Caitlin Lopez
Music Director: Sean Alexander Bart
Event Media: 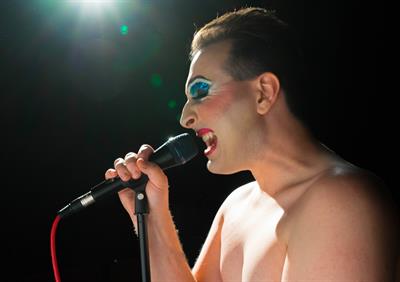 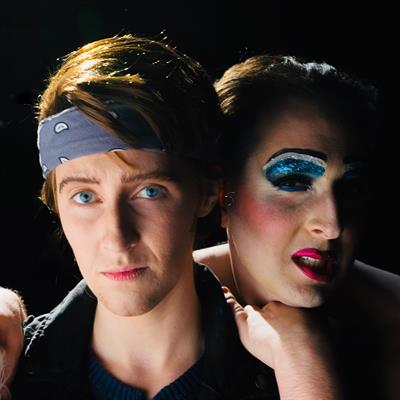 Contact Information:
Tickets available at opheliasjump.org or by calling 909-734-6565
Send an Email
Fees/Admission: