Stupid F**king Bird is an irreverent, contemporary, and very funny remix of Chekhov’s The Seagull. Aaron Posner stages a timeless battle between young and old, past and present, in search of the true meaning of it all.

About Stupid F**king Bird:
Dev loves Mash who loves Con who loves Nina who loves Trig who is going out with Emma, Con’s mother. Complicating this chain of unrequited passion is the constant clash between idealistic aspiration and material reality. For Con, a young playwright with a disdain for the status quo and a burning desire to create “new forms” the lofty ideas in his head always deflate and fall flat in execution leaving him in a perpetual state of existential crisis.

“It doesn’t matter how big a fan of Chekhov’s plays you are — Stupid F**king Bird has something for everyone (including big heaping doses of depression, anxiety, narcissism, futility, and raucous laughter)”– George Heymont, My Cultural Landscape

Original songs composed by James Sugg draw the famously subtextual inner thoughts of Chekhov’s characters explicitly to the surface. Stupid F**king Bird will tickle, tantalize, and incite you to consider how art, love, and revolution fuel your own pursuit of happiness.

Ophelia’s Jump is a non-profit Performing Arts Theatre producing plays, staged readings, the Midsummer Shakespeare Festival in Claremont, and hosting youth & adult improv & acting classes. Ophelia's Jump Productions was founded by artists and educators who believe that the purpose of theatre is to create unending conversations, spark imagination, incite conscience, and elicit a visceral response. Ophelia’s Jump aims to invigorate the creativity and intellect of the community by working with local emerging artists. http://www.opheliasjump.org 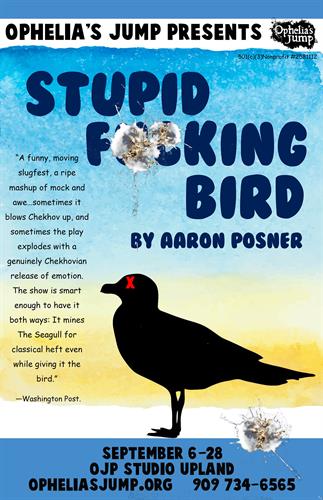