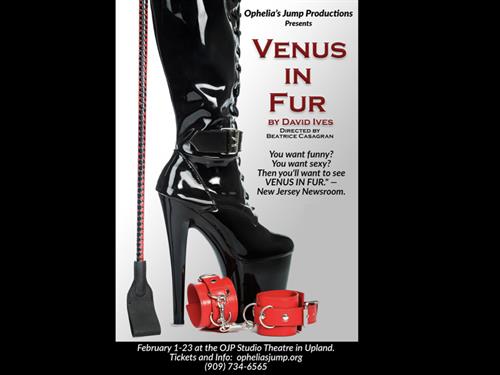 “The teeter-tottering test of wills that takes place in Venus in Fur makes even the most fraught encounter between a domineering director and a sensitive performer seem like a play date in the sandbox….In this ninety minutes of good, kinky fun, the upper hand does not necessarily belong to the usual suspect.” - NY Times.

"Ives has crafted a modern take on a classic tale, skillfully twisting his plot and characters in a fast-paced journey into one man's entrapment by a clever, vengeful female."  - Associated Press.

About Venus in Fur:

Thomas, a beleaguered playwright/director, is desperate to find an actress to play Vanda, the female lead in his adaptation of the classic sadomasochistic tale Venus in Fur. Into his empty audition room walks a vulgar and equally desperate actress—oddly enough, named Vanda. Though utterly wrong for the sophisticated part, Vanda exhibits a strange command of the material, piquing Thomas’ interest with her seductive talents and secretive manner. As the two work through the script, they blur the line between play and reality, entering into an increasingly serious game of submission and domination that only one of them can win.

Ophelia’s Jump is a non-profit Performing Arts Theatre producing plays, staged readings, the Midsummer Shakespeare Festival in Claremont, and hosting youth & adult improv & acting classes. Ophelia's Jump Productions was founded by artists and educators who believe that the purpose of theatre is to create unending conversations, spark imagination, incite conscience, and elicit a visceral response. Ophelia’s Jump aims to invigorate the creativity and intellect of the community by working with local emerging artists.