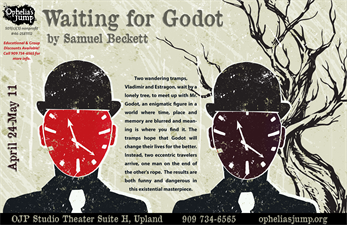 Regular Run April 24 through May 11

Ophelia’s Jump Productions (OJP) continues its successful 7th season with Samuel Beckett’s masterpiece, Waiting for Godot, performed at the OJP Studio Theater, located at 2009 Porterfield Way, Suite H, in Upland, from April 24 through May 11, 2019. Having just completed their production of Hedwig and the Angry Inch by John Cameron Mitchell and Stephen Trask, OJP ventures on to explore the human condition under the direction of Founding Artistic Director, Beatrice Casagran.

About Waiting for Godot:

Two wandering tramps, Vladimir and Estragon, wait by a lonely tree to meet up with Mr. Godot, an enigmatic figure in a world where time, place, and memory are blurred and meaning is where you find it. The tramps hope that Godot will change their lives for the better. Instead, two eccentric travelers arrive, one man on the end of the other's rope. The results are both funny and dangerous in this existential masterpiece.

“I wanted to present a Godot for the 21st century,”explains Director Beatrice Casagran who has set the play atop a gigantic trash heap in the not too distant future evoking a vision that channels the angst of modern uncertainty through Beckett’s timeless gentlemen-in-waiting.

“One of the true masterpieces of the century.” — Clive Barnes, The New York Times

"Beckett is the archetypal playwright of uncertainty. He is the ideal author for this perplexing era. What better time to hear those famous lines “I can’t go on. I’ll go on.” — Sophia Howes, DC Metro

Ophelia’s Jump is a non-profit Performing Arts Theatre producing plays, staged readings, the Midsummer Shakespeare Festival in Claremont, and hosting youth & adult improv & acting classes. Ophelia's Jump Productions was founded by artists and educators who believe that the purpose of theatre is to create unending conversations, spark imagination, incite conscience, and elicit a visceral response. Ophelia’s Jump aims to invigorate the creativity and intellect of the community by working with local emerging artists. http://www.opheliasjump.org 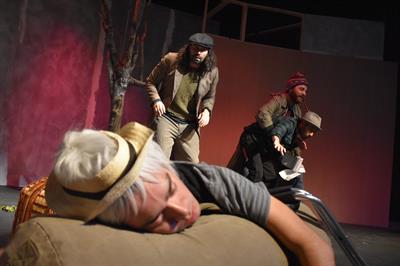 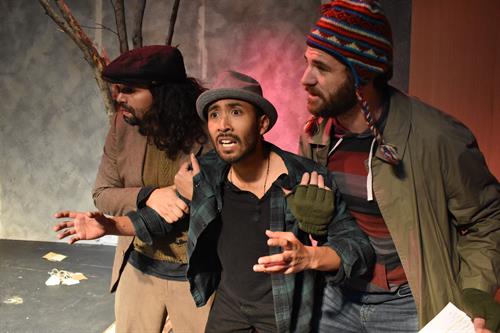