ShakesBEER is coming to Claremont on Saturday, July 17, 2021. 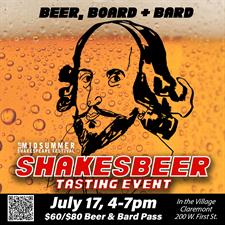 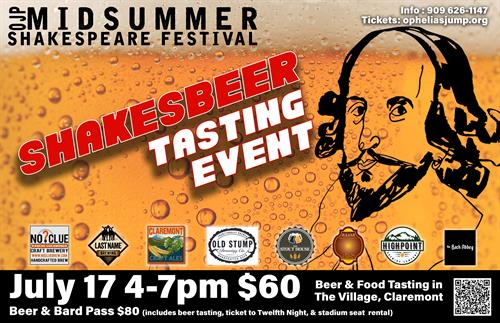 ShakesBEER is coming to Claremont on Saturday, July 17, 2021.
ShakesBEER is organized by Ophelia’s Jump Productions, the non-profit theatre company that is staging its production of Twelfth Night at the Sontag Greek Theatre, Pomona College, Claremont.

From 4:00 p.m. to 7:00 p.m., there will be craft beer tasting and food tastings at various outdoor locations in the Claremont Village. Music will be performed by various bands.  Drink pours will be available with food tasting and souvenir glasses at the different locations. Dress up in Renaissance costumes if you wish (but this is by no means mandatory).

Then, at 8:00 p.m., there will be a performance of Shakespeare’s Twelfth Night, a comedy about love and attraction. Prior to 8:00 p.m., the area around the Sontag Greek Theatre will be open for picnicking, with artists’ booths and food booths. There will also be a Green Show (a form of pre-show entertainment, a tradition dating back to Elizabethan times).

Tickets in all categories can be purchased online at http://opheliasjump.org

If you can’t do the beer tastings and the Twelfth Night performance in the same day, you can see the play on another night during its run (July 15-July 25).

The Ophelia’s Jump Midsummer Shakespeare Festival production of Twelfth Night is co-sponsored by Pomona College, Janelle and Randall Lewis, Carol Sorgenfrei and Discover Claremont. Want to make a weekend of it? Go to http://discoverclaremont.com to find out about hotel packages in Claremont, along with other local activities (museums, quaint shops, Botanic Gardens) that make this charming college town an ideal weekend getaway.